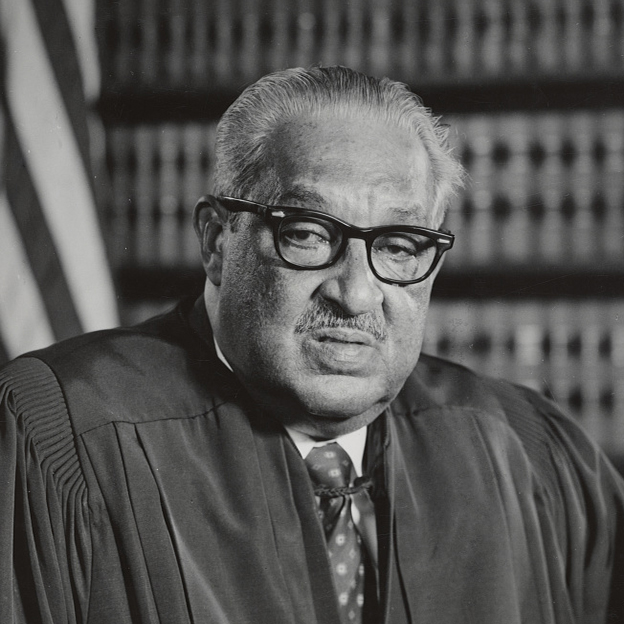 July 2, 1908, marks the birthdate of Thoroughgood (“Thurgood”) Marshall, the first African-American United States Supreme Court Justice, who played a pivotal role in inspiring the American Civil Rights movement over several decades. Born in Baltimore, Maryland, at the height of Jim Crow segregation, Thurgood notably utilized the judiciary to champion the preservation of equality and individual rights regardless of race.

During Marshall’s formative years, several personal experiences sparked his interest in the law and formed a lasting impression on his trajectory as a social justice pioneer in the years to come. For example, Marshall’s father frequented the local courthouse to observe proceedings, often resulting in lively evaluations of the lawyers’ arguments with his sons around the dinner table. As a punishment for misbehaving during high school, Marshall was instructed to read the entire U.S. Constitution. In retrospect, his intrigue with the document inspired him to memorize various parts of it, instilling in him singular respect for the rule of law from a young age.

Although Marshall was denied admission to the University of Maryland School of Law in 1930 due to his race, he went on to graduate as valedictorian at Howard University School of Law in 1933. While pursuing his studies at Howard, Marshall developed a professional working relationship with Vice Dean Charles Hamilton Houston, the African-American civil rights lawyer and educator who served as the first general counsel for the National Association for the Advancement of Colored People (NAACP). In 1936, Marshall relocated to New York to pursue full-time employment as counsel for the NAACP and was soon named Chief of NAACP’s Legal Defense and Educational Fund.

Through establishing precedents in career-defining cases, such as Murray v. Pearson (1936), Chambers v. Florida (1940), and Sweatt v. Painter (1950), Marshall helped lay the groundwork for challenging the legal underpinning of the “separate but equal” doctrine established by the 1896 Supreme Court case Plessy v. Ferguson. Representing African-American parents whose children were forced to attend segregated schools, Thurgood won Brown v. Board of Education of Topeka in 1954, the landmark Supreme Court case ruling racial segregation in public schools as a violation of the equal protection clause of the 14th Amendment. Despite receiving death threats after Brown v. Board of Education, Marshall continued to defend civil rights demonstrators while dominating the legal landscape within the United States.

Inspired by Marshall’s zeal for ensuring citizens’ rights and dismantling segregationist ideals, newly elected President John F. Kennedy appointed “Mr. Civil Rights” as a judge for the United States Second Circuit Court of Appeals in 1961. During his tenure, Marshall issued over 100 decisions, none of which was overturned by the United States Supreme Court. Four years later, President Lyndon B. Johnson appointed Thurgood as the first African-American Solicitor General – the third-highest office in the United States Department of Justice. He won 14 out of the 19 cases he argued before the Supreme Court on behalf of the United States government.

Only two years later Marshall was appointed by President Johnson and confirmed by the United States Senate to serve on the nation’s highest court as the first African-American Associate Justice of the United States Supreme Court. President Johnson proudly proclaimed this historic nomination in 1967 as “the right thing to do, the right time to do it, and the right man and the right place.” Throughout Marshall’s historic 24-year tenure, his commitment to the expansion and preservation of individual rights guided the formation of significant social policies protecting minorities and the disadvantaged.

Due to his declining health, Marshall retired from the Supreme Court in 1991, passing away two years later from heart failure. Marshall is only the second Justice to be honored by a flag-draped casket laid in state in the Great Hall of the Supreme Court. Because Marshall considered his law clerks to be part of his extended family, his staff were personally invited to attend his burial at Arlington National Cemetery. Sheryll Cashin, Professor at Georgetown Law and Clerk for Marshall from 1990-1991, recalled in an interview how Marshall was an exemplary leader, valiantly wielding the law to safeguard the liberties of those in need.

In 1978, Texas Southern University renamed its law school the Thurgood Marshall School of Law in honor of Marshall’s legacy and has since solidified its reputation as one of the nation’s top institutions conferring degrees to African-American law graduates. In 1992, the American Bar Association and the Section of Civil Rights and Social Justice established the Thurgood Marshall Award honoring the indelible impression Marshall made on American jurisprudence and the American justice system as a whole. The American Bar Association defines this prestigious award as an opportunity to recognize “similar long-term contributions by other members of the legal profession to the advancement of civil rights, civil liberties, and human rights in the United States.”[1]

In 1993, the Supreme Court issued a special resolution memorializing Thurgood’s view of the law as a living, evolving instrument capable of changing the world. Chief Justice William H. Rehnquist masterfully articulated the gravity of Marshall’s legal legacy with the following words: “As a result of his career as a lawyer and judge, Thurgood Marshall left an indelible mark not just upon the law but upon his country. Inscribed above the front entrance to this Court building are the words, ‘Equal Justice Under Law.’ Surely no individual did more to make these words a reality than Thurgood Marshall.”[2] As we celebrate the commemoration of “all men are created equal” this Independence Day, may we also as a nation foster a newfound admiration for Marshall’s indomitable pursuit of racial equity for all.